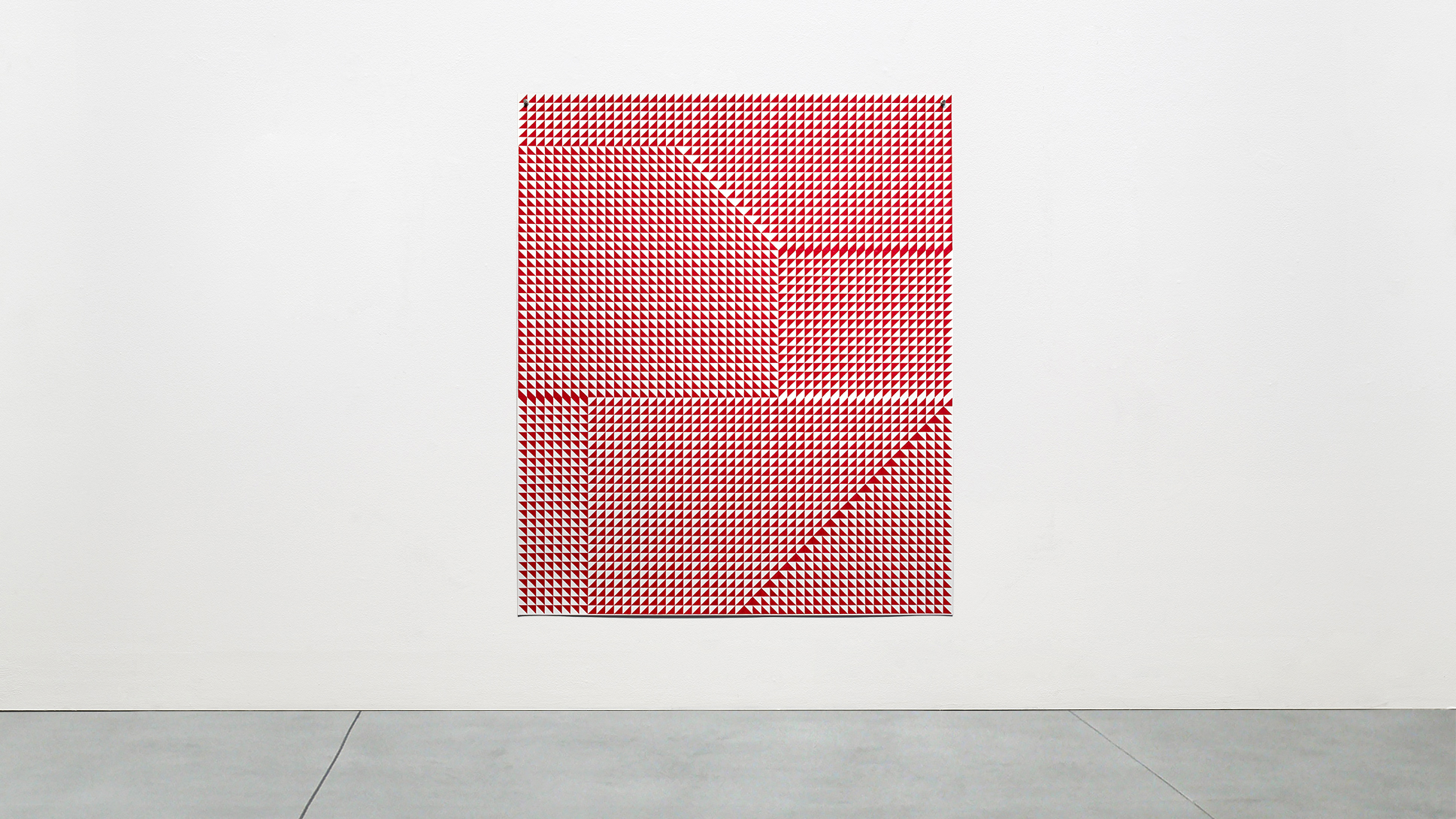 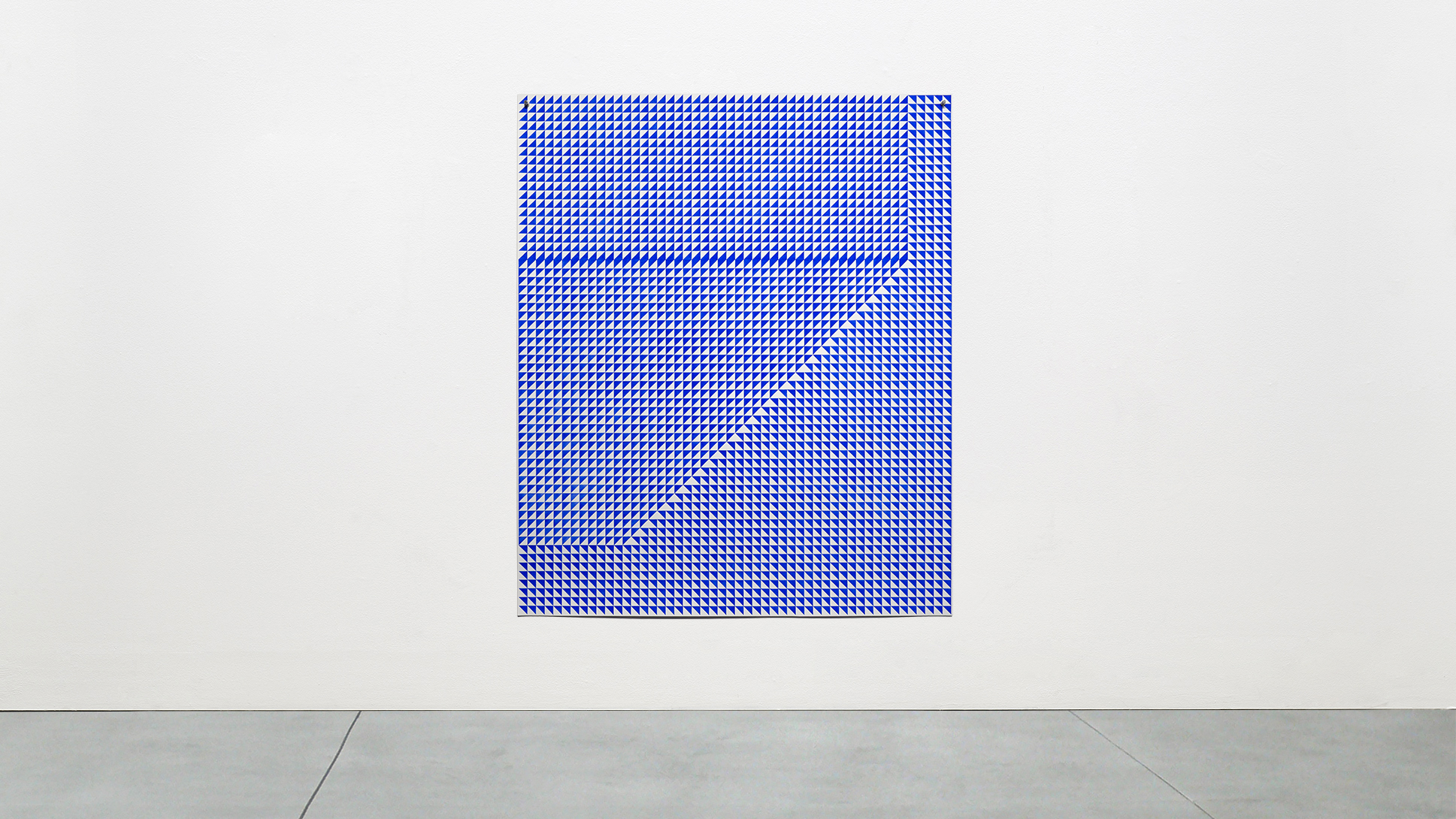 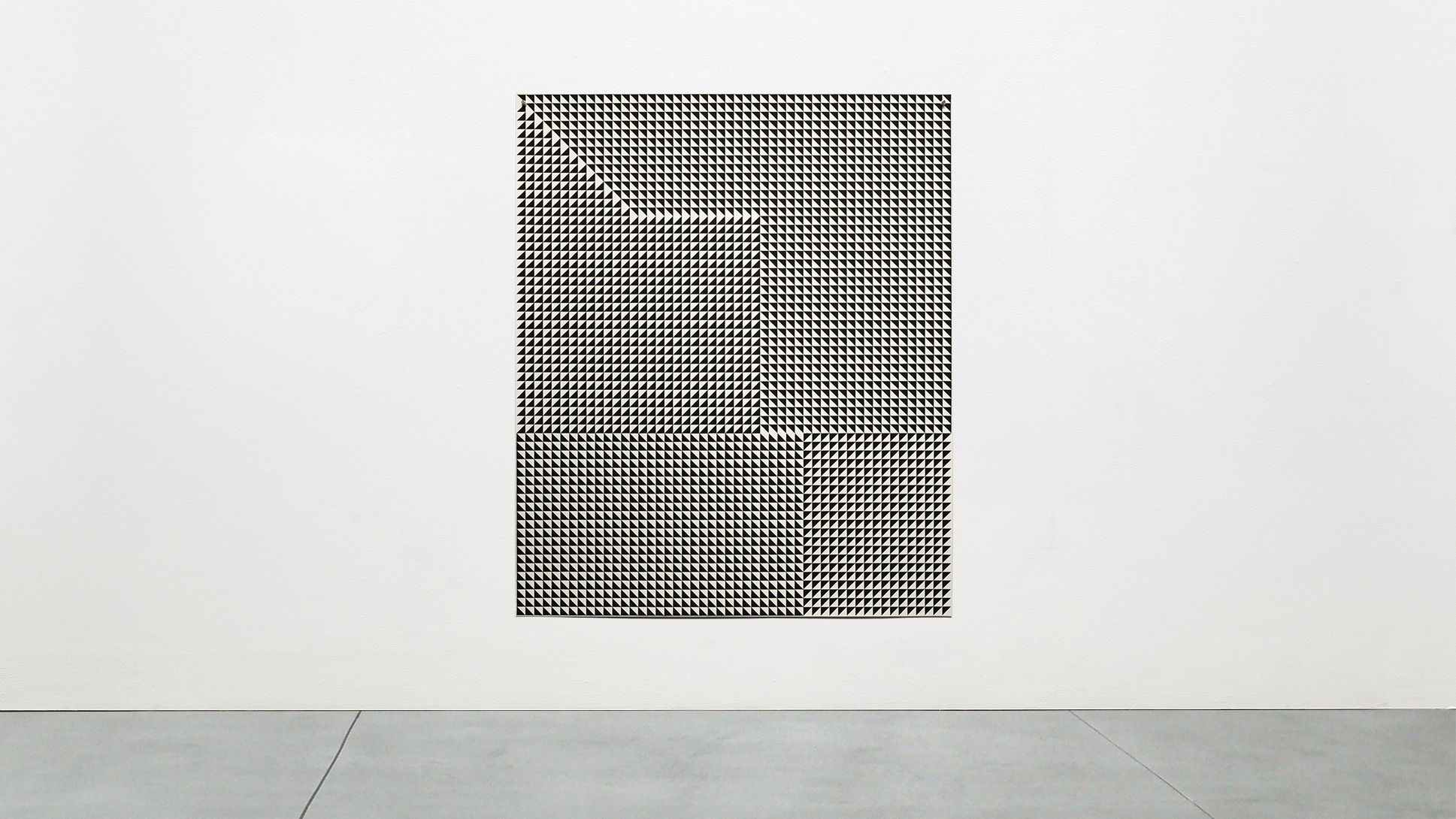 Giulia Ricci
Black No. 3, 2019
Gouache and pencil on paper
120.4 x 100.4 cm
47 2/5 x 39 1/2 inch
> View closeup
As in earlier series, the artist uses a title consisting of a pairing of words: Alteration/Deviation. Previous bodies of works included Order/Disruption, Parallel/Bend and Orientation/Disorientation. The artist’s titling emphasises the interplay of contrasting elements such as two colours, the interplay between fore- and background or the direction in which a pattern is drawn, which in turn relates to the idea of warp and weft. Each aspect carries the same visual weight, as a result, there is a  sense of interchangeability between the contrasting components.
‍
The compositional strategy of Alteration/Deviation is based on a limited range of changes in a pattern which are obtained by modifying the orientation of a right-angled triangle within a square. As areas with differing orientations are placed in proximity, they generate contrasts that vary in intensity depending on the placement within the overall composition, producing a dynamic interference on the boundary of two areas; for example the contrast is significantly enhanced along borders occurring at an angle of 45 degrees. This latest series embraces the notion of setting a strict set of preconceived parameters, offering their own visual proof that a surprisingly wide range of possibilities for image-making can be developed from a simple set of rules and dispassionate unfolding of the motions of the artist's hand. Indeed, Ricci remarked about her sense of gratification from exploring what at first appears to be a narrow framework only for this to open limitless possibilities for developing a diverse set of compositions.
Whereas the dimensions of earlier works were determined by how far the artist’s arm could reach, these latest pieces are made in sections, allowing Ricci to expand the overall size exponentially. These works, conceived as small maquettes, are then painted on a larger scale, resulting in a new physical experience. The realisation, for Ricci, that it is not necessary for the artist to see the entire surface of the sheet at once while working has made possible a new range and new level of nuance in her practice. 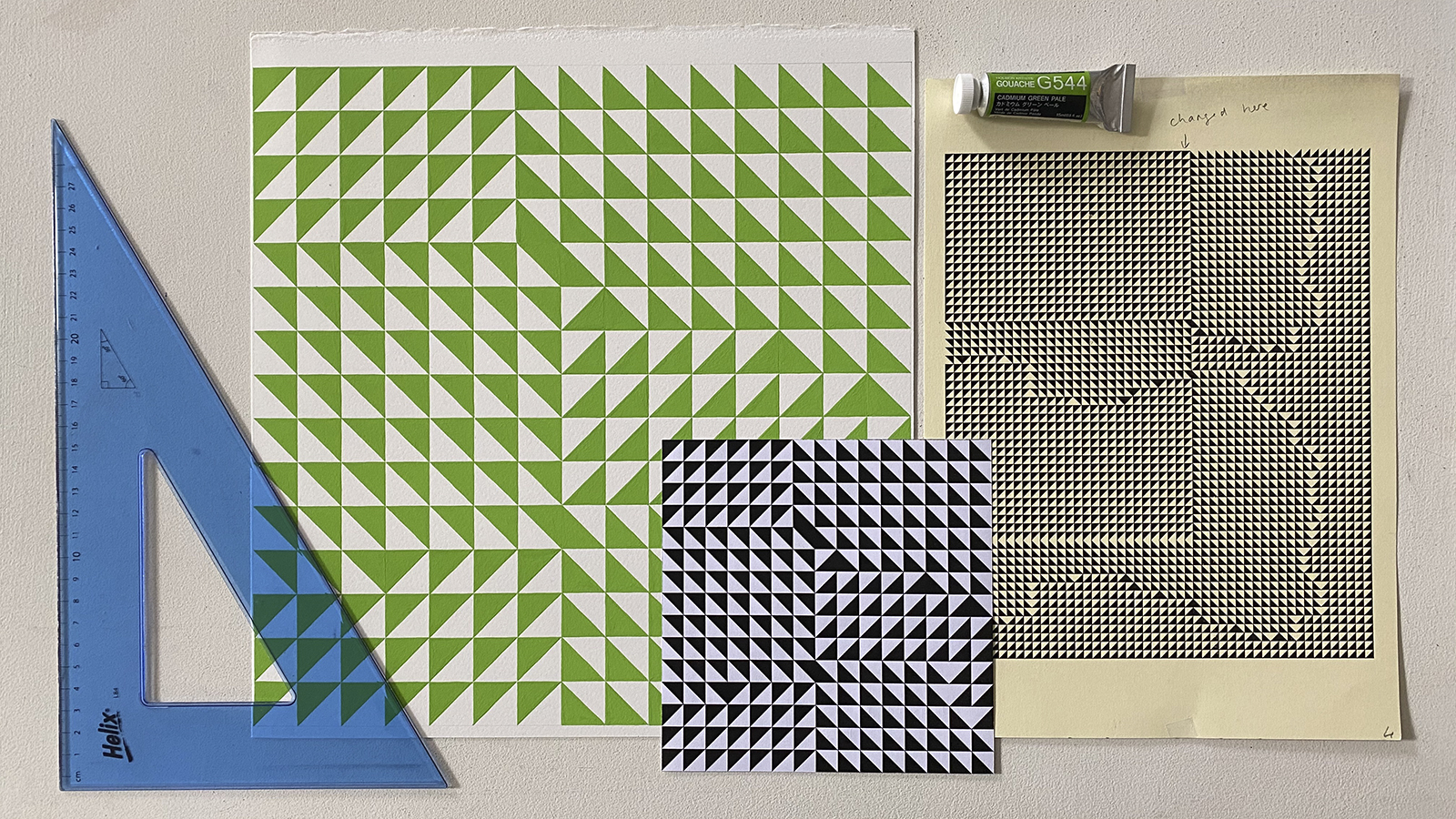 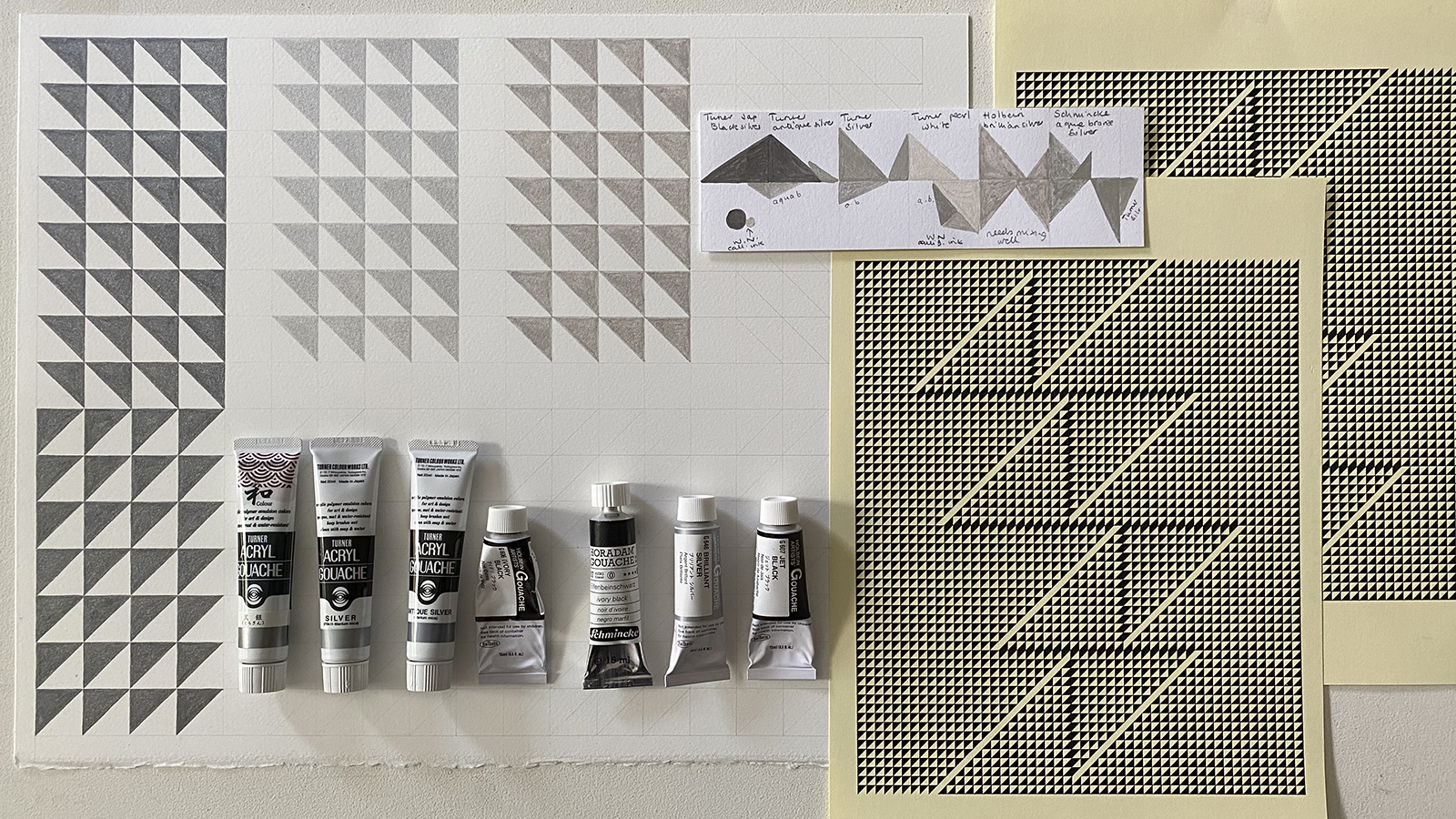 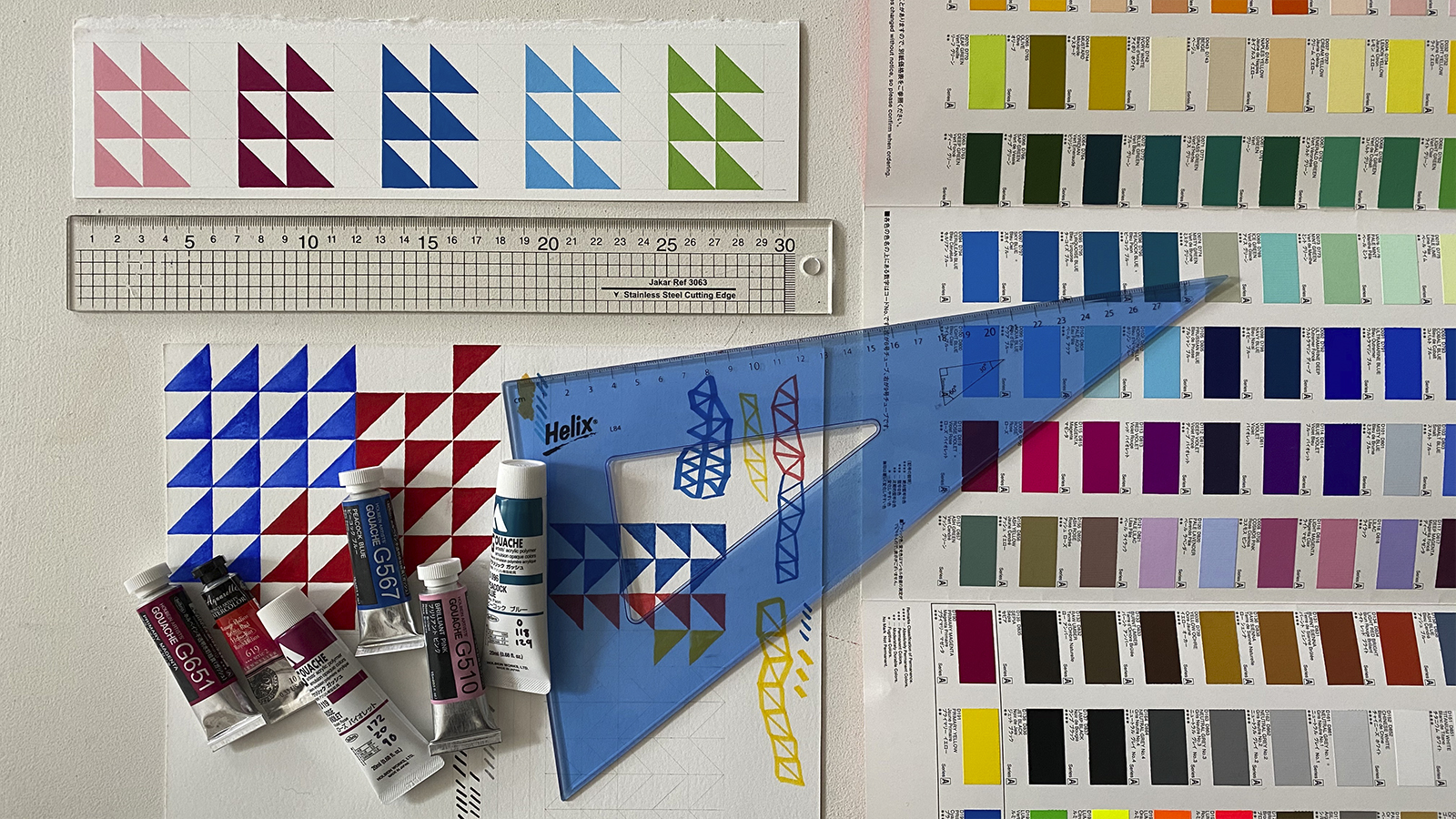 Giulia Ricci Studio May 2020
Giulia Ricci’s renewed interest in and engagement with architecture has sparked the interest in exploring works on a larger scale. Indeed, over the past five years, the artist has made a series of large-scale site-specific commissions within architectural spaces.  Somewhat misleadingly described as drawings, these installations are made with materials as varied as vinyl or etched bronze. This has become a significant development within the artist’s practice and has led her to devise new approaches to experiential and direct relationship with architectural space, which in turn has clearly impacted on new studio work such as the Alteration/Deviation series.
‍
Thanks to a continuing collaboration with a neuroscientist at UCL, which started in 2019, the artist has also developed a particular interest in the concept of embodied cognition, according to which the body and its sensations influence our cognitive processes. This notion has informed her interpretation of the relationship that we have with spaces from a purely tactile perspective. 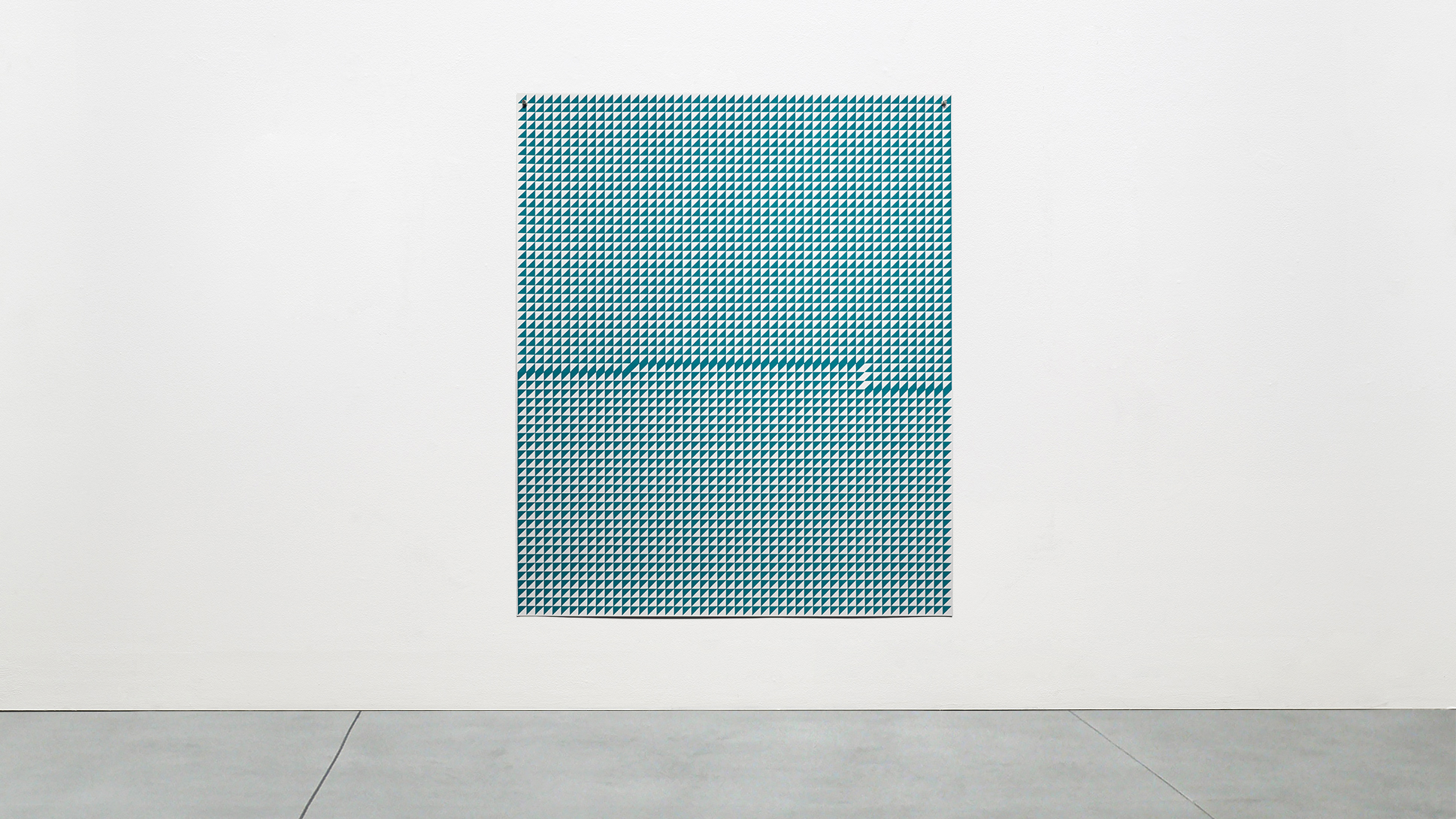 Giulia Ricci
Green No. 4, 2019
Gouache and pencil on paper
120.4 x 100.4 cm
47 2/5 x 39 1/2 inch
> View closeup
The majority of the artist’s smaller works on paper have a landscape orientation, a reminder of the sense of proximity and physical relationship that occurs between the eyes and an open book or a video screen. Alteration/Deviation works are oriented to portrait format, not only because of their larger scale but rather to suggest the relationship of the whole body with architectural elements such as windows or doors.
‍
Finally, a note on the colour and the type of pigments used and the method of their application. These signal yet another point of departure from previous bodies of works. Unlike pens, which are applied with a linear progression, subject to variations due to the angle at which the pen nib draws and the pressure applied by the hand, the water-based pigments (watercolour and gouache) used in Alteration/Deviation are applied by the artist as discrete sections of uniform colour. Following the guides of a grid initially drawn by pencil, a very fine brush is used to delineate the three sides of each triangle; this brush outline works as a boundary that neatly contains the viscous liquidity of the paint filling which is subsequently applied with a second brush. The choice of pigment reflects the desire to achieve a super-matt finish, elevating sharp edges that dry to a uniform flatness. The precise appearance nevertheless retains the texture and feel of the hand-made and these apparently contradictory forces are equally important aspects of Giulia Ricci’s practice. Over the past year, the artist has been researching pigments that have a particular quality, allowing for uniformity of application and brilliance of colour; some of the chosen pigments are honey-based watercolours, but most are varieties of gouache. While the artist had often used black ink in previous works on paper, this new series features a confident use of bright colours, as such Ricci’s examination of these highly specific materials is also the beginning of an exciting journey of discovery into the field of colour. 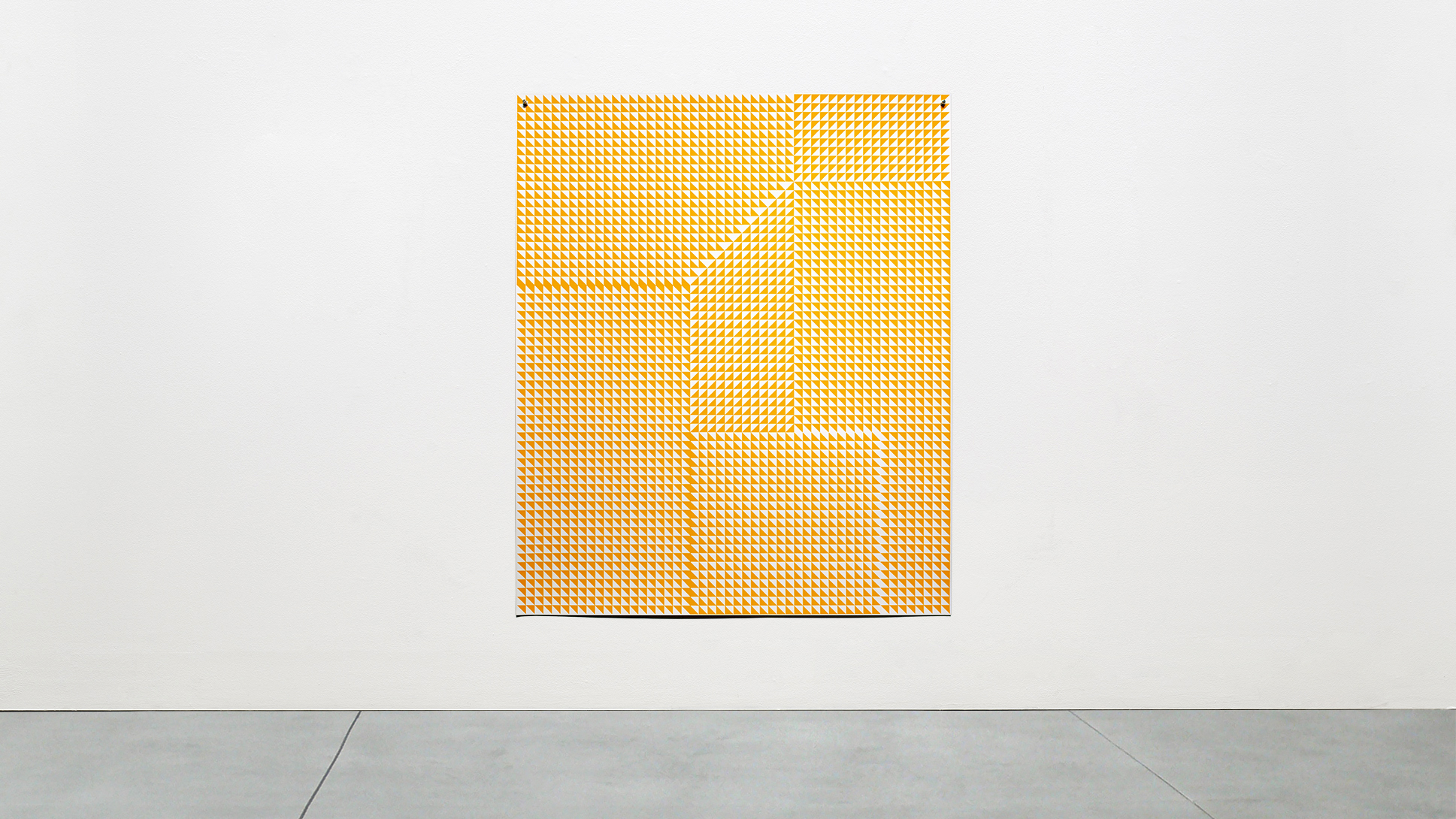 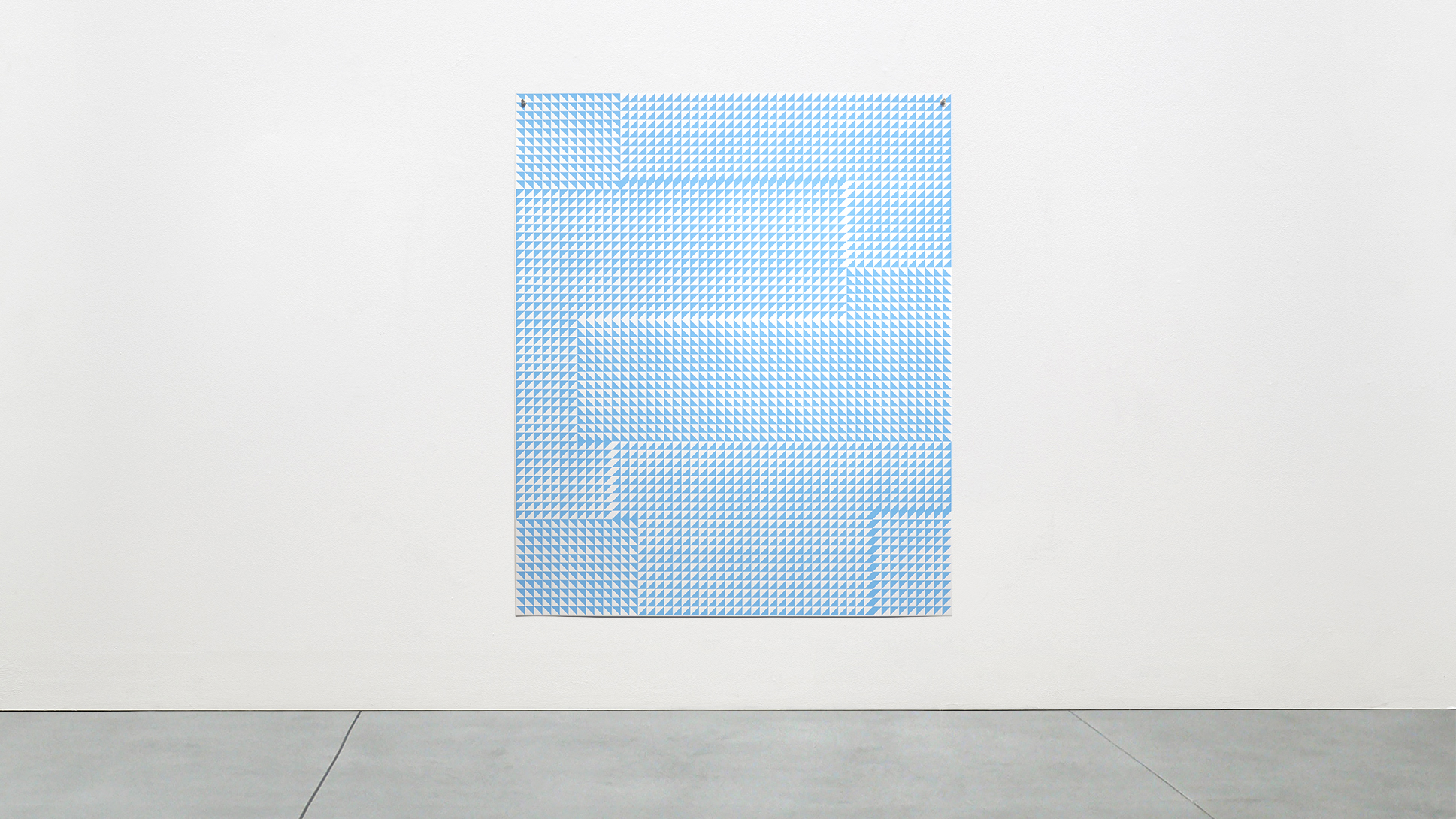